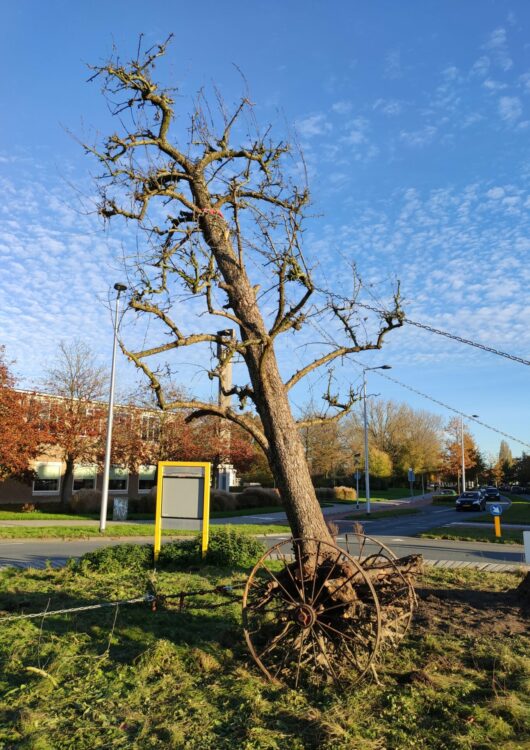 For most people a dead tree is nothing but a useless object. If there’s one on your property you get rid of it. But for the new artwork on the VHDG roundabout on the Julianalaan in Leeuwarden Belgian artist Leendert van Accoleyen went out searching for one. He wants to give the tree a new life by raising it up again himself. The first time nature did all the work; this time mankind will do it. From Saturday the 12th of November this work called ‘Transport to Mars 003’ will be exhibited on this roundabout for one month.

Stones and Trees
The original idea for this project started during a residency in Portugal. Usually Leendert works with discarded objects that no longer serve a purpose, like waste. Over there however, Leendert stayed in a densely forested area where there was near to no thrash at all. The materials he did find there inspired the creation of a new artwork. With a knife and some rope he bound a stone he found to a two-meter-long branch and created a lever mechanism. This way he could lift the stone up in the air. If he let go, nature used gravity to pull the stone back to the ground.

Sometime later, during a residency in southern France, Leendert chanced upon a dead tree. Thinking back of the stone, he wanted to get this tree up in the air as soon as possible. He found two wheels he could utilize for this purpose. Quickly he fabricated an axis through the trunk of the tree, and created a simple but effective system to raise it up. With a couple of stones blocking the wheels and tying down the tree with rope, within no time he created the first incarnation of Transport to Mars. This time gravity wasn’t strong enough.

The Work is Central
An important theme within Leenderts practice is that the work or the action itself is central. His goal is to create works that speak for themselves without any form of explanation. Often his work is about simple actions that can be interpreted in various ways. Do you find a different meaning in it instead of what Leendert wanted to communicate? That’s good, because it starts a dialogue. His artworks are unique, but he does not make ‘new’ things. Even during the creation process he gives the found materials a central place by letting it lead him in the transformation into an artwork. He does not invest in expensive materials. Instead he finds, collects and rearranges. It is about the action, the small meddling with the world, placing objects or products of nature temporarily in a different context. After a month the tree will simply become a part of nature again.

Version 003
With this philosophy as a starting point, this roundabout project is a bit of an exception. Transport to Mars came into being spontaneously, according to his characteristic methods. Transport to Mars 002, a later recreation of the work, was the opposite. The plan to repeat the earlier project was there, and then the materials to realize it had to be sought. This time, not the material but the idea was leading. That felt a little strange.

For this third version, Transport to Mars 003, Leendert attempts to reconcile this new way of establishing a project with his usual way of working. Will he succeed? Who knows. May he find a perfect compromise, or maybe this will be the last time he will try such a thing. Truly only Leendert can say at the end of this process. But for the artwork itself actually none of this really matters. What does Transport to Mars 003 mean to you?