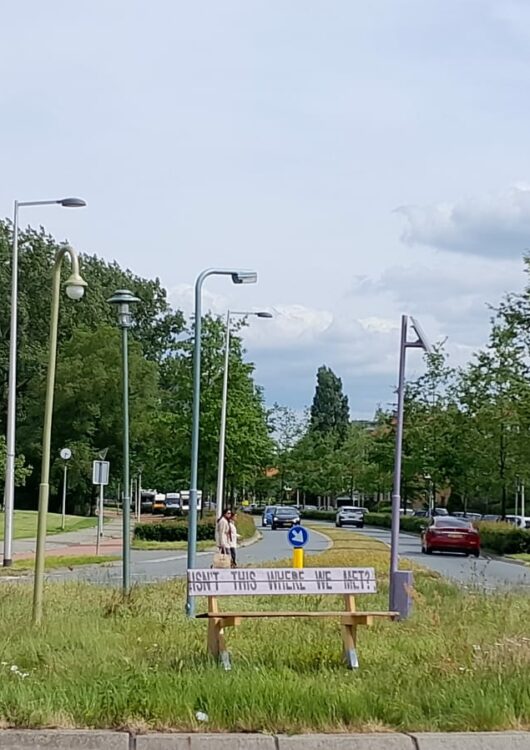 Four lampposts of about 3,5 meters high are reaching up on the roundabout at the Julianalaan. With the lampposts there’s a wooden bench. The whole forms a kind of cozy, almost nostalgic situation. ‘Isn’t this where we met?’ has been sprayed in graffiti letters on the bench. This is also the title of this roundabout artwork by artist Lucas Sloot.

In early 2022 we set out the Open Call 360°: Roundabout looking for Artwork. We received a great amount of submissions with a lot of inspiring and wonderful ideas. After careful consideration we have chosen for this extraordinary artwork by Lucas Sloot!

The work consists of a number of different models of lampposts in various colors and a wooden bench, on which graffiti has been sprayed. It looks like a meeting place and invites you to sit down. But can you actually sit there? How can you meet each other on a roundabout? Isn’t that a place where you can’t, or maybe even aren’t allowed to come? Then who have met each other here? And how? This casual scene of an apparent meeting is in sharp contrast with the inaccessibility of this little piece of land in the middle of the roundabout. A no man’s land that suggests you can come there, but you can never reach due to the ever-circling cars riding around it.

Lucas makes copies of everyday structures and likes to work with wood. Think of objects like power pylons or lampposts. By copying these objects he explores the materiality and at the same time the limitations of the shape of the copied thing. By reproducing the form stays unchanged, but if you use a different material for it the work does get a new dimension. This is what Lucas does, and it results in interesting discoveries. This way Lucas has claimed an artistic angle that characterizes his work.

In the past Lucas primarily looked at his works as constructions; and you can see it in the artworks themselves. Nowadays Lucas allows himself a little bit more freedom of form. He looks at the copies, takes the most interesting parts and reuses them in a new, more free interpretation of the work. This way the work ‘Half krommetje’ (‘Half bend’) came forth out of the series ‘Isn’t this where we met?’. De bend shape of wooden lampposts – only a part of the whole object – has been accentuated in the new work. The process of utilizing copies of existing shapes in this way to come to new finds, Lucas considers as an intensive bond between him and the work.

The temporal artwork of Lucas Sloot is exhibited for one month, from May 11 through June 14, day and night, at the roundabout connecting the Julianalaan and Hobbemastraat in Leeuwarden. Stop by and take a good look at this fresh, questioning work, that recalls a vague sense of familiarity. …Isn’t this where we met?