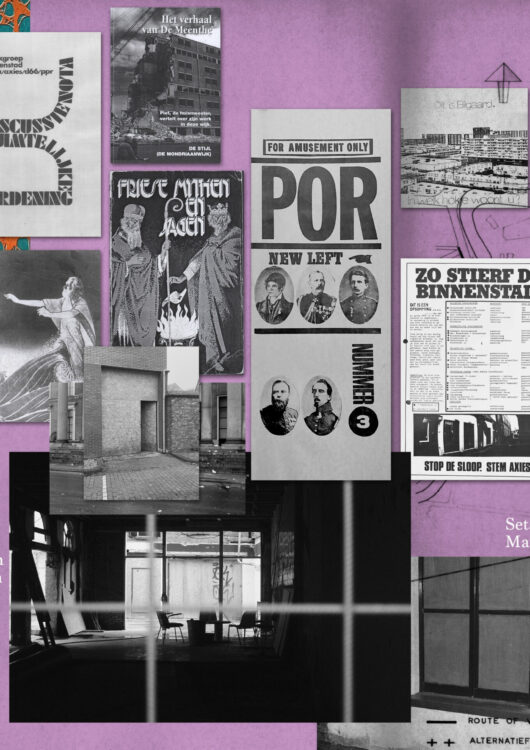 From the first of November until the 16th of December the artist duo SMET will do artistic research from our Artist in Residence in the Hania. SMET consists of artists Matt Plezier and Setareh Noorani. Two artists from different generations and with diverging backgrounds, but with a strong, shared fascination for local tories, forgotten histories, urban development and community building in a city. First they will primarily explore Leeuwarden and will use personal stories and encounters to dive into the history of the city. In the second half of 2023 SMET will return to Leeuwarden for an intensive period of workshops, activities, art and publications for the local community and everybody who is interested.

Counterculture and self-organization
Matt and Setareh got to know each other through the worlds of counter culture, the squatting movement and the hardcore punk scene. These are places where communities that take a stand against mainstream culture and create space for alternative art and music. Setareh organizes events for experimental noise and ambient music and researches notions such as queering and feminism within architecture in various urban environments. Matt got into the world of self-publishing after his life in the hardcore punk scene, and shares stories and images of alternative urban culture. This counterculture and D.I.Y. mentality is still recognizable in many aspects of their work.

The common thread
During earlier residencies in Hoorn (at Hotel Maria Kapel), in the Bijlmer, Amsterdam (for The Black Archives) and in Nijmegen (during De Gelderland Biennale) they started their research in a similar manner. They examine what is happening, what stories the local people carry with them, and together with partner organizations they investigate what ‘community’ means in that location. It’s a word used often, but is very differently interpreted and experienced. How does a community work, and how does that affect you, both if you’re a part of it or not a part of it? Which community is the most or the least visible, and why? Are there threats to such a community?

What connects all these projects in different cities are the ideas of self-reliance and collectivity. In Hoorn, SMET discovered the history of the squatting movement of the city and used it as a basis to organize workshops for the inhabitants of the city – young and old – about how art, culture and collaboration can stimulate social cohesion and how to use the city to their advantage.

In the Bijlmer Matt and Setareh found out about the housing crisis, the lack of social facilities and the inequality within the local population. They also noticed how there were large, empty spaces in between the flats that weren’t being used by the residents of the different blocks. In an interesting way they connected this to the (spatial and activist) history of the Bijlmer and speculated about a (new) squatting culture.

In Nijmegen they combined working together with local partners (artists and independent art spaces) with archival research. They stumbled upon rich but forgotten histories, for example of political party associations, local squatting culture and black activism. This led to a project in which they aimed to make these archives publicly accessible and to activate them, which might lead to new forms of activism in the present day.

Research in the AiR
In Leeuwarden they will research the history of counter culture as well, which might lead to new inspiration about an alternative future for the city. The Hania, an old school building that was squatted in the 80’s by artists and now harbors a lively community, forms the perfect starting point for this project.

With the experience gained in other places in the Netherlands, their D.I.Y. mentality and relevant theories they’ll investigate social aspects of the city and by exploring what is happening on the streets of Leeuwarden. Through our social media they will share the progress of their research, and we’ll also update this page as the project becomes more defined.

Photo: Conspiracy board, Shelter in Place / Shelter in Solidarity, Hoorn, 2021